As of 19th February 2010, these are a list of missing Bridge Officer abilities. I don't know whether they are actually learnable by Bridge Officers or not. If you manage to find one, or find out if it's not trainable in any way to a Bridge Officer, please adjust this list and the main article respectively. --Flibby 01:31, 19 February 2010 (UTC)

In case anyone is wondering where you get them from, you can see on this image: 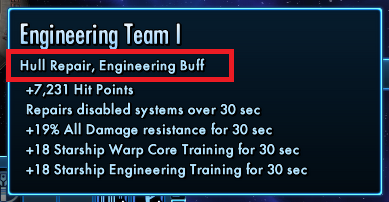 I rewrote this page and added tables to easier reading as the original page was very hard to read. It was also due to all the skills on the original page having I, II and III their links and they needed removing. The cell background colours need checking as I don't know where all skills come from, and also some skills are missing (mostly rare/very rare and captain trained skills).

Some of the descriptions are overly short, as I was trying to keep every skill to one line to avoid the table getting broke and stretched out of proportion causing other cells to become harder to read. I couldn't get in the type of system the space abilities use due to page width restrictions (like Deflector Dish, Crew, Emitters etc) which is unfortunate but the skill itself would list it on their own articles. If anyone can find a way to get these in without going beyond 1 line, then that would be great. --Flibby 17:30, 9 February 2010 (UTC)

Oh, I see, thanks for the clarification. It could well be some of them are gained from both the Captain training and rare/very rare Bridge Officers, although some of the ones I checked (such as Viral Matrix III and Polarize Hull III) I couldn't find on the Captain training from the skill system, but they were available from rare/very rare bridge officers. --Flibby 19:33, 9 February 2010 (UTC)

I would speculate that anything a captain can train can also be learnt from a rare bridge officer candidate though --Lem (talk) 00:19, 10 February 2010 (UTC)

They seem to be called multiple things on different parts of the game. Example would be when buying a new candidate from the requisiton officer or that you got from the New Officer mission, when you hover over the tooltip it lists "Ground Abilities" and "Space Abilities". Although when you open your status window you have to go to the "Skills" tab. Also when speaking to the Bridge Officer Trainer he refers to them as "powers". I'm not sure what the best thing to call them would be --Flibby 10:36, 10 February 2010 (UTC)

Apparently it's available on the Photonic Bridge Officer that you can get as a reward for referring someone to the game, if a screenshot is needed I can confirm it, but otherwise, someone want to add that to the list? --Lord Trekie 06:26, 2 September 2010 (UTC)

Yes, please, post a screenshot with the ability info to this talk page, or create a new article with the information. Regards, --RachelGarrett 08:29, 2 September 2010 (UTC)

The following skills are no longer trainable by captain and (presumably) appear only on bridge officers:

I confirmed the first two and the second two are available from captain training. Page should be fully up-to-date now. --MatthewM 20:47, 4 February 2012 (UTC)