Dilithium Ore, and many reward

Prior to Season Fifteen: Age of Discovery, Task Force Operations were referred to as PvE Queues and Fleet actions. 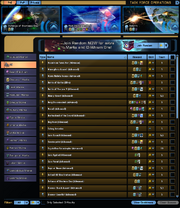 The feature was originally introduced with Season Four: Crossfire as a way to find other players to join in for fleet actions. In Season Seven: New Romulus, the interface for the queue menu was updated and expanded to include Special Task Force missions and PvE group events.[1] In Season Thirteen: Escalation, the Queue Menu received a revamp, including a complete visual overhaul.[2] In Season Fifteen: Age of Discovery, it received further adjustments, including the addition of Random Task Force Operations.

Players are introduced to TFOs via the mission “Task Force Operations” from the available tab. The mission gives a brief tutorial of the menu and finding TFOs.

An average Task Force Operation is a queue of around 20 minutes (varying considerably according to complexity and player skill) involving 5 players (with very rare exceptions requiring 10 or 20). They are either ground or space combat missions and can come in normal, advanced and an elite variants. Many TFOs are tied to a particular Reputation System, although most will offer more than one type of mark, and form part of the game's story.

Competitive queues are structured slightly differently from regular PvE queues, by adding in a PvP element. Two teams of players have to compete against each other through a series of challenges, with only rare direct PvP combat. These queues require more people two teams of 5, are not part of the RTFO system and reward Competitive Wargames Reputation

Featured TFOs are a 3 week event format that launched in November 2018 to replace Featured episodes. They are intended to spotlight new or remastered TFOs. The first TFO to be launched was “Battle at the Binary Stars”. After the Featured Event is over, the TFO is temporarily unavailable for play until the next major release. For example, Operation Riposte was re-introduced into the game with Rise of Discovery, launching with added Advanced and Elite difficulties attached as well.

On April 18, 2019, a new system was added to Star Trek Online alongside the Featured Task Force Operation, “Operation Riposte”. Players could earn progress toward one free Tier 6 Starship by participating each day (every 20 hours) in Featured TFO Events from April 2019 to August 2019. This was later expanded upon in September and October of 2019 with the addition of a new Event tab in the Mission Journal, which allowed for multi-event Event Campaigns to be ran.

Red Alerts, unlike FTFOs, are time-limited but repeated. They are usually simpler in structure to a normal queue and can be triggered by interacting with objects in sector space, as well as via the menu. They are usually held over a long weekend.

Like Red Alerts, there are a number of other queues that are repeated throughout the year. These are more regular style TFOs and often give out a special reward via account-wide vouchers. These queues are often characterised either by being seasonal or by being based on ever-increasing waves challenging players ability to hold out.

Public Task Force Operations allow you to join public matchmaking for a specified queue. Upon reaching the required player count, it will give you a confirmation message. Once all teammates confirm, the mission will be launched.

Most queues are available in the system, with the following exclusions:

Private queues can be created that can hold up to four teams of 5 (20 players) and requires five players to start. To do so, click the Create Private tab and under PvE, choose a queue of any difficulty. Press Start Private Queue to create an instance.

Certain queues require a certain level to be unlocked and cannot be played below that level. The queues can also be sorted based on ground, space, public private, unlocked, and locked.

. In addition, they offer 480 in dilithium

and Research and Development Materials which vary according the queue. Advanced and Elite versions offer additional Elite Reputation Marks, extra dilithium (720 for advanced; 1440 for elite) and higher rarity R&D materials.

The reputation marks are either offered as a broad choice, or are limited to those marks that are relevant to the Reputation the TFO's story is tied to. For example “Battle of Procyon V” was released with and is tied to the story around the Temporal Defense Initiative, so awards Temporal Marks and Chroniton Buffer (on advanced/elite versions).

TFOs not linked to a reputation, usually because they are pre-level 50, often just reward fleet marks and dilithium.

In addition to basic Reputation Mark reward, player can earn 55 Daily Bonus Marks for each reputation once per day.

“Battle at the Binary Stars”

A handful of queues reward Dilithium

and gear to who have contributed the most (e.g., most damage dealt/taken). Finishing in first place gets a random Very Rare item (as well as the accolade and trophy, if not already obtained), second and third place gets a random Rare item, and all other players get a random Uncommon item. These include “Romulan Imperial Minefield” and “Crystalline Catastrophe”.

Featured TFOs and calendar (e.g. Seasonal or Special) Events award Daily Progerss every 20 hours across the account, allowing players to claim special rewards. FTFOs are usually for a 3 week period only before the end; although they usually return later as a regular TFO without the commendation reward. Calendar events are for 4 days but repeat with different rewards on each run.

After completing a random TFO, you will receive a reward box containing dilithium and a choice of marks. The rarity is random, with the difficulty determining whether you get Normal or Advanced boxes. Advanced boxes give 40% more marks and dilithium.