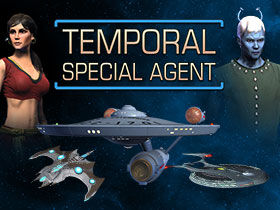 or it can be purchased through Arc.

The life of a Temporal Agent will take you across time and space to strange frontiers and deadly battlegrounds. With the items found in the Temporal Special Agent Pack, you’ll be well-prepared to tackle these threats. Take command… before time runs out!