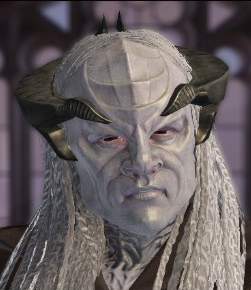 Tenavik is a monk of the monastery of Boreth. Born in 2257, he is the son of Voq, formerly the Torchbearer to T'Kuvma, and L'Rell, Chancellor of the Klingon High Council. Delivered to Boreth as an infant, he was encountered only months later as a grown man by Captain Christopher Pike of the U.S.S. Discovery due to the influence of the time crystals in the monastery.