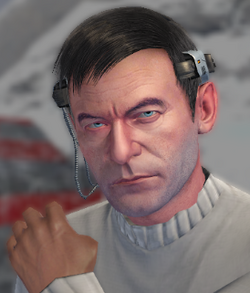 Note: Terran is sometimes used to refer to Humans and other things from Earth in the Prime Universe.

Terrans are humans of the Mirror universe. The two species, Human and Terran, are nearly identical except for the latter being more sensitive to light. Beyond that, however, there is a stark societal and/or psychological rift between the two. Terran counterparts of Humans tend to be more aggressive, paranoid and callous.

Human and Terran biology are near-identical, except for Terrans being sensitive to light. They can be seen to struggle with bright light in the prime universe, something that is potentially due to a difference in light in the mirror universe.

It is unknown when, or if, Terran society diverged from the prime timeline, or whether their ideology is from societal values or deeper rooted. Historical works in the mirror universe were darker than those in the prime universe, on a par with Shakespeare which is "equally grim in both universes." However prime universe ideals were said to be held by Terrans "millennia ago" before they were shed as destructive delusions that bred rebellion.

Terran culture draws elements from Roman society, such as the Roman salute, but follows a deeper, fascistic culture predicated on an unconditional hatred and rejection of anything and everything "other". Despite a high level of oppression, Terran culture is potted by treason and mutiny. Like Klingons, they institutionalise a system of challenging a superior officer to combat with a superior's death resulting in officers moving up in rank. Unlike Klingons, Terrans do not present this as a system of honor; rather they make a virtue of ambition. Violence for Terrans is an ingrained evolutionary survival mechanism far in excess to humanity's predilections.