Terran Guerilla Combat Armor is a Terran Body Armor. This item is leveless until level 50, and will calculate its effectiveness based on the level of the character that equips it. It is a reward from the inaugural run of the Featured Task Force Operation “Peril Over Pahvo” in March 2019.

It can now be purchased from the Zen Store for 8,000

under the name Evil Lorca's Armor as part of "Mudd's Market", though it periodically goes on massive discounts (upwards of 60% during special promotional sales).

These simple blast-shielded chestplates are kept on hand on many Terran Empire vessels for use in arming crewmen and granting basic protection to ground troops facing rebellious elements and insurgents. They contain a refractive surface that passively scatters some sensor fields, granting an increase to stealth capabilities without sacrificing protection. This same refractive layer can be activated to temporarily delay incoming energy, converting it into somewhat less painful physical compressions that spread out its application over several seconds.

The Terran Guerilla Combat Armor can be upgraded freely to Mk XII, and then using the Ground Gear Tech Upgrades. It will receive an additional modifier on successful rarity improvement. Those can't be re-engineered. 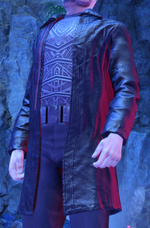 The armor and jacket tailor unlocks

Acquisition of this item will grant a tailor unlock for the Terran Guerilla Armor and its leather jacket, named "DSC Terran Guerrilla Jacket", under the "Off Duty - Jacket Loose Long" category.