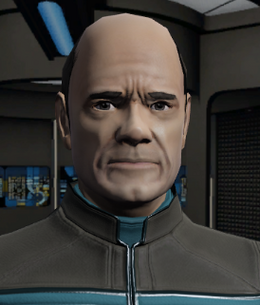 The Doctor, formally known as the Emergency Medical Hologram Mk 1, is a sentient holographic male Human. He is best known for his tenure as the U.S.S. Voyager's Chief Medical Officer while the ship was lost in the Delta Quadrant from 2371 to 2378.

In 2371 the Chief Medical Officer of the U.S.S. Voyager was killed when the ship was hurtled 70,000 light years into the Delta Quadrant by the Caretaker, prompting The Doctor to be activated in his place. Over the following years, he would grow and develop beyond his original programming, becoming an invaluable member of Voyager's crew.

In 2373, during a temporal incident involving time travel back to 20th-century Earth, The Doctor acquires a mobile emitter, allowing him to leave the confines of Voyager's sickbay and holodeck and even participate in away missions. In 2378, he returns to Earth with Voyager.

In 2382, the Doctor sues Starfleet which wants to confiscate the mobile emitter in order to study the device. Based on the "Data-precedent", the Doctor wins the lawsuit as he is considered a sentient being and the loss of the emitter would greatly decrease his quality of life. The following year, the case is re-opened, as the Data-precedent merely clarifies the Doctor not to be Starfleet's property, without implications for him being sentient or not. Around the same time, the Soong Foundation, which is dedicated to promote the rights of artificial lifeforms, announces its plans of creating their own line of mobile emitters.

In 2389, the Soong Foundation is defending the Doctor. In the hopes of eventually freeing the 600 other EMH Mark Is working in dilithium mines, his lawsuit is expanded to encompass all sentient artificial lifeforms in the Federation. Five years later, the lawsuit is finally concluded, with the Judge Advocate ruling that the Doctor is indeed a sentient being and has the right to choose how he wants to live. None of the other EMHs are freed yet, though.

With the mobile emitter being his approved property, the Doctor accepted a commission as a Lieutenant Commander in Starfleet and took the post of Chief Medical Officer at the research facility on Galor IV in 2395. Here, he also cooperated with the Starfleet Corps of Engineers, who were allowed to study the mobile emitter.

By 2410, the Doctor is assisting in the efforts of the Delta Alliance to explore the newly-accessible Delta Quadrant.