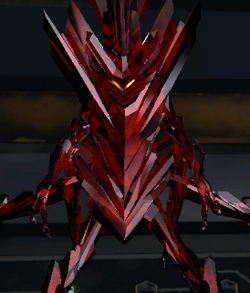 Tholians are a non-player race from the planet Tholia, capital of the Tholian Assembly. They are known to be extremely xenophobic, rarely leaving their core territory.

Tholians are mostly made of a crystalline material. Their biology requires high temperatures around 480 Kelvin (207 °C, 404 °F) in order to keep their hard mineral carapaces sufficiently soft. Although they could tolerate lower temperatures for a brief period of time, Tholians are killed by sustained insufficient heat as their carapace would begin to freeze and crack below ca. 380 Kelvin.

Tholians are hermaphroditic, meaning they possess both male and female characteristics.

Because of their crystalline structure, Tholians are also naturally able to emit various forms of radiation, which - in addition to using it as a weapon - they could modulate in order to communicate over short distances.

There are also a number of biological features shared by the Tholians and the Crystalline Entity.