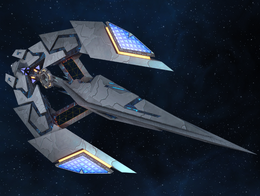 The Tholian Jorogumo-class Carrier is a Tier 6 Science Carrier which may be flown by characters of any faction. This starship can be used from any level upon completion of the tutorial experience. As you level up, this ship gains additional hull, weapon slots, and console slots.

Players can obtain this starship as a ultra rare drop from the [Infinity Lock Box]; it comes in an [Infinity Prize Pack - T6 Ship] choice package, which is bound to you until a ship is chosen. The boxed ship is not bound and so may be traded to other players or bought and sold on the Exchange for energy credits under the name [Special Requisition Pack - Tholian Jorogumo Carrier [T6]].

Recent conflicts with the Tholian Assembly have resulted in a handful of captured Tholian vessels. Tholian technology is very different from other Alpha Quadrant powers, and these vessels are prized as opportunities for study as well as new combat vessels. The Tholians' natural environment is hostile to most humanoids, and their ship interiors were designed to support that environment. Much effort has gone into simply modifying the interiors to let personnel board these vessels without environmental suits.

During its retrofitting process, the biggest improvements to the Tholian Jorogumo Carrier stemmed from a re-design of the lattice components that link the main ship structures. Changes to the internal environment to make it suitable for humanoid life had made this design be significantly less performant, and this re-design removed the bottleneck that had arisen there.

With this reconfigured structure in place, in addition to the optimizations made elsewhere to attempt to work around the bottleneck, engineers aboard the Jorogumo found themselves with a substantial surplus of power available for use. Some of this surplus was used for improvements such as an improved slipstream drive, additional flexibility on the bridge stations, higher power reserves, and a project best described as “highly innovative.”

As a final note on the retrofitting project, the team’s weapons experts believe they’ve finally unlocked the means by which Tholians simultaneously target the subsystems of several ships with such high precision. While this starship is uniquely suited to this tactic, the report suggests that, given enough practice, any officer should be able to replicate it on other starships.

It also comes with a [Thermionic Torpedo Launcher], which has a chance to drain weapon and engine power from a target.

By using an [Experimental Ship Upgrade Token], the Tholian Jorogumo-class Carrier may be upgraded to T6-X, unlocking an extra ship device slot, universal console slot, and the ability to slot an extra starship trait.