This page is for the NPC starship. For the playable vessel, see Tholian Tarantula Dreadnought Cruiser. 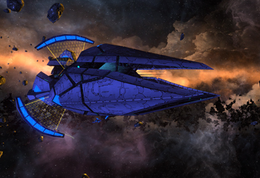 The Tholian Tarantula is a dreadnought used by the Tholian Assembly. At 2070 metres long, it is largest and longest Tholian ship, as well as one of the largest non-Borg ships in-game.