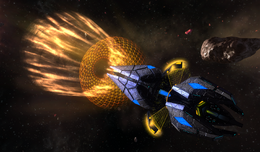 This article is for the playable starship. For the NPC vessel, see Tarantula Dreadnought.

The Tholian Tarantula-class Dreadnought Cruiser is a Tier 6 Dreadnought Cruiser which may be flown by characters of any faction. This starship can be used from any level upon completion of the tutorial experience. As you level up, this ship gains additional hull, weapon slots, and console slots.

Players can obtain this starship as a ultra rare drop from the [Infinity Lock Box]; it comes in an [Infinity Prize Pack - T6 Ship] choice package, which is bound to you until a ship is chosen. It can also drop from the older [Mirror Incursion Lock Box]. The boxed ship is not bound and so may be traded to other players or bought and sold on the Exchange for energy credits under the name [Special Requisition Pack - Tholian Tarantula Dreadnought Cruiser [T6]].

This ship could also be purchased as an account-unlock from the Zen Store as a possible choice from the Mudd's Choice Pack of Dread! as part of "Mudd's Market", available from November 20, 2020. Like all items in the Market, the Bundle periodically goes on massive discounts (upwards of 75% during special promotional sales).

The Tarantula is the largest and most formidable starship in the Tholian fleet, built by the reclusive crystalline entities to stand up to anything that the galaxy might throw at them. It is both durable and relatively agile for a ship of its class. It was built with versatility in mind; it is quite capable of performing nearly any role handily.

The Tholian Tarantula Dreadnought Cruiser comes equipped with one wing of Tholian Widow Fighters. These fighters are equipped with one fore Tetryon Beam Array and one fore Quantum Torpedo Launcher. The Tarantula also unlocks Tholian Mesh Weavers for use, armed with Tetryon Beams and Thermionic Torpedoes. Both pets are also designed to work with the Tholian Jorogumo Carrier's Tholian Tetryon Grid.

By using an [Experimental Ship Upgrade Token], the Tholian Tarantula-class Dreadnought Cruiser may be upgraded to T6-X, unlocking an extra ship device slot, universal console slot, and the ability to slot an extra starship trait.