This page is for the NPC ship. See Tholian Widow Fighter for the playable ship. 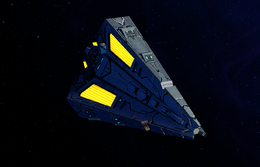 The Widow is a fighter used by the Tholian Assembly. At 60 meters long, it is their smallest and weakest ship class.