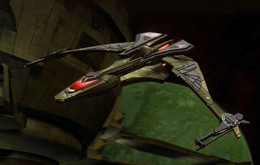 The To'Duj-class Fighter is a Tier 1 (Level 1) Small Craft which may be flown by Klingon Defense Force characters, including Klingon Empire-aligned Romulan Republic and Dominion characters. All faction restrictions of this starship can be removed by having a level 65 KDF character or by purchasing the Cross Faction Flying unlock from the Zen Store.

Players can obtain this starship from the Zen Store for 500

. This ship can be purchased individually, or as part of the First Time Buyer's Pack for spending any amount of

. It is also available as part of the following: console-only Klingon Empire Pack for 4,000

, console-only All Faction Mega Bundle for 8,000

An interceptor craft designed for quick strikes against lightly-armed enemies, the Empire uses the To'Duj in battles across the quadrant. It is lightly armed, fast and maneuverable, and is the standard fighter assigned to KDF vessels and starbases, analogous to the Federation Peregrine Attack Fighter. It is favored by captains of Vo'quv-class Carriers, who appreciate its powerful attacks and high maneuverability.

The To'Duj-class Fighter has a battle cloak that allows the ship to cloak during combat, granting stealth and a damage bonus upon decloaking.

The To'Duj comes with a built-in Cannon: Rapid Fire I. It can be used even without a Tactical bridge officer assigned.

Klingon fighters come with Standard Issue-S equipment and weapons that scale with the player. Additionally, fighters have specialized dual cannons that have a 45-degree targeting arc. These cannot be equipped on any other type of vessel.

The following table compares the To'Duj with other Klingon small craft.