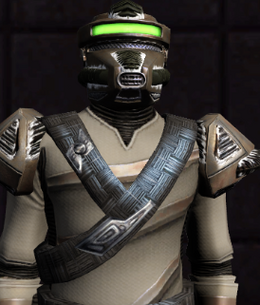 Tran is a Breen H'ren Medic in the Fifth Order. He is captured by the Deferi when boarding their ship in the Raveh System.

-What are you doing here

-What does attacking a civilian transport have to do with Breen expansion?

-Your commander can not hear what we are saying.

-Did you object to your commanding officer about this assignment?

-Do you believe that the goal you are attempting to achieve was worth killing civilians?

-Did you have an option that didn't involve attacking the Deferi ship?

-So your mission wasn't just to kill the Deferi on this ship?

-Why did you do this? What information did the Deferi have that you needed so badly?

-Would the probed Deferi know what memories were being searched?

-How do we remove the implants?