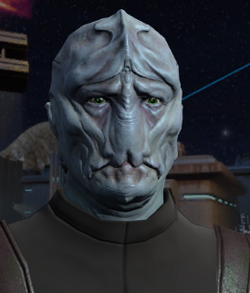 The Turei are a reptilian race from the Turei System in the Delta Quadrant and members of the Delta Alliance.

Being considered a worthy, fellow reptilian species, the Turei formed an alliance with the Voth at some point in their history.

In the 15th century, the Turei led an alliance of Delta Quadrant species against the vast Vaadwaur Supremacy and bombed their homeworld into a dead rock. With the Vaadwaur defeated, the Turei seized control of the Underspace, a system of subspace corridors, and used it for their own means.

First contact between the Turei and the Federation occurred in 2376, when the U.S.S. Voyager briefly became trapped in the Underspace and encountered a Turei vessel which attempted to board them. Voyager took refuge on the Vaadwaur homeworld, where they re-awakened a battalion of Vaadwaur from stasis and eventually came under attack from the survivors. With little choice, Voyager contacted the Turei and were able to enlist their help in escaping the planet. While many Vaadwaur ships were destroyed in the ensuing battle, several dozen managed to escape into the Underspace.

Because of their allegiance to the Voth, Turei don't have their own starship classes, but utilize Voth Palisade Frigates modified to serve as both frigates and cruisers. It is unknown whether the Palisade-class is the result of a joint Voth-Turei operation, or if they were built by the Voth and then just given to Turei after the alliance was established. Unlike the Voth counterpart, which is equipped with antiproton and transphasic-chroniton weaponry, Turei vessels are outfitted with plasma energy beams and projectiles.