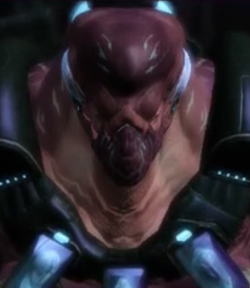 The Tzenkethi are a reptilian race originating from the Tzenketh System in the Alpha Quadrant. One of the major powers in that part of the galaxy, Tzenkethi clashed with both the United Federation of Planets and the Klingon Empire during the 24th century. After suffering heavy losses, Tzenkethi withdrew to their home sector and remained silent for the better part of the century. In 2410, after years of isolation, the Tzenkethi Coalition started preparing for a new war for seemingly no reason. The true target of their attacks have been revealed as insects called Drantzuli, which serve as wardens of the Klingon's only conquerors, the Hur'q.

A reptilian species, Tzenkethi have dragon-like heads, rhino-like skin and four arms - two strong ones for fighting and two weak ones for nimble, precise handling. Their backs have a set of bony plaques, giving these already powerful creatures one less weak spot. Fully armored, each individual Tzenkethi resembles a walking weapons platform.

Not much is known about their naming convention, except that Tzenkethi of noble birth have a prefix "Tzen" in front of their family name. [1]