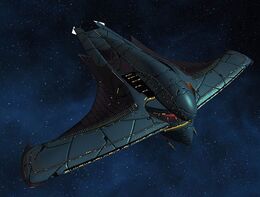 This page is for the playable starship. For the NPC vessel, see Tzen'tar Dreadnought.

The Tzenkethi Tzen-tar-class Dreadnought Carrier is a Tier 6 Dreadnought Carrier which may be flown by characters of any faction. This starship can be used from any level upon completion of the tutorial experience. As you level up, this ship gains additional hull, weapon slots, and console slots.

Players can obtain this starship from a [Special Requisition Choice Pack - Tier 6 Promotional Ship Choice Pack], which has a ultra rare chance to drop from a [Promotional R&D Pack] or a [Promotional Duty Officer Pack]. This box is bound to you until a ship is chosen. The boxed ship is not bound and so may be traded to other players or bought and sold on the Exchange for energy credits under the name [Special Requisition Pack - Tzenkethi Tzen-tar Dreadnought Carrier [T6]].

Tzenkethi war fleets have clashed with the Federation and their allies twice within living memory, and both wars have proven that their technology and warfare tactics are a match for any other major civilization within the known galaxy. Their focus on inventive maneuvers and purpose-built shield arrays have helped secure victory in many engagements against what would otherwise be considered superior opponents.

The Tzenkethi Tzen-tar Dreadnought Carrier epitomizes the Tzenkethi reliance on resilient shielding and coordinated tactics. By utilizing its massive offensive and scientific capabilities in tandem with wings of expertly-piloted frigates, the Tzen-tar-class commands and controls any battlefield it enters.

This ability is part of the Shell Shock Set, which also includes [Console - Universal - Peripheral Refraction Array] and [Console - Universal - Momentum Manipulator] obtainable with Tzenkethi Shuk-din Escort (T6) and Tzenkethi Rhas'bej Battlecruiser (T6), but also equippable on the Tzenkethi Tzen-tar Dreadnought Carrier. For each console added after the first, an additional passive bonus is unlocked.

Compared to other Frigate Hangar Pets, these have increased Shield Capacity at the cost of lower Hull. They may only be obtained if you own the Tzen-tar Dreadnought Carrier, but may be equipped on any starship that has a Hangar Bay.

The Advanced variant of the Shuk-din Frigates can be obtained from the Dilithium Store, while the Elite variant is obtainable from the Fleet Starbase with unlocked Tier V Communications Array.

Cyclical Quantum Slipstream Drive is a built-in ability which allows enhanced slipstream Sector Space travel speed for 90 s, with a 30 s cooldown. Travel speeds are listed as Transwarp factors, however the cooldown is not reduced by the trait Well Travelled.

By using an [Experimental Ship Upgrade Token], the Tzenkethi Tzen-tar-class Dreadnought Carrier may be upgraded to T6-X, unlocking an extra ship device slot, universal console slot, and the ability to slot an extra starship trait.