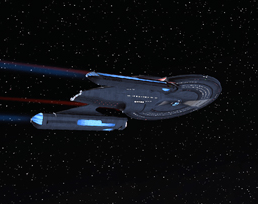 The U.S.S. Callisto was a Luna-class science vessel in service to Starfleet in the 25th century. Prior to 2410, the Callisto made an approximately 30,000 light years trip away from the Sol System on a long-term exploration mission in the Delta Quadrant.