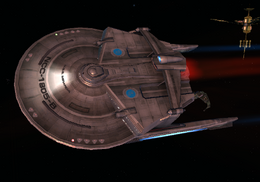 The U.S.S. Miranda is a Miranda-class Frigate active in 2409. Judging by her registry number, she is at least the third Starfleet vessel to bear the name.

The Miranda can be seen orbiting Drozana Station in the Drozana System.