This article is about the political body of the Federation. For the playable factions, see Starfleet, TOS Starfleet and DSC Starfleet.

The United Federation of Planets (UFP, or FED, but commonly referred to as The Federation) is an interstellar federal republic of 150 planetary governments. These worlds work in cooperation to uphold their principles of justice, equality, and rights, as well as expand and share their knowledge and resources for the purpose of space exploration and peaceful cooperation with other races.

Starfleet functions as the Federation's military, defensive, and exploratory branch (in a similar fashion to a navy acting as the military branch to governments the old nation-states of Earth). The two terms should not be conflated.

The Federation is composed of thousands of planets spread across 8,000 light years in the Alpha Quadrant and Beta Quadrant. Earth, its capital world, is located on the border of these quadrants but is shown, in Star Trek Online as accessible from the Beta Quadrant side only. Note that only a small part of Federation space is accessible from sector space; Federation territory stretch far beyond the playable area.

Some trace the origin of the Federation back to Zefram Cochrane and First Contact between Humans and Vulcans. Vulcans, Andorians and Tellarites had tense relations in the 2150s until Humanity, notably Jonathan Archer, helped them cooperate to counter efforts by the Romulan Star Empire to destabilize relations between them.

In part, it succeeded. However, relations between the Coalition and the Romulans reached all-out war in 2156. Following the end of the war, the Charter of the United Federation of Planets was signed by the coalition in 2161 in San Francisco. Starfleet, previously a branch of United Earth, became the cornerstone of the new Federation's defence, humanitarian and exploration efforts.

In 2256, a conflict with the Klingons was triggered which led to a war that nearly ended the Federation as Klingon forces reached as far as Starbase 1.

While peace was reestablished, tensions remained high until the Organian Peace Treaty. Relations also improved with the Gorn, after an initial hostile encounter, with joint mining operations in the Edren System.

Without the sacrifice of the Enterprise-C, the Federation may well have found itself in another conflict with the Klingons

Peaceful relations with the Klingons was solidified by the Khitomer Accords of 2293 and the sacrifice of the U.S.S. Enterprise-C in defence of a Klingon colony against Romulan attack. Meanwhile, the Treaty of Algeron with the Romulans, which followed the bloody Tomed Incident, defined a neutral zone, banned the Federation from using cloaking technology and set a period of Romulan withdrawal.

Against this backdrop, the Federation's next generation of captains returned to exploration, but one far less at the frontier than the previous century. Further border wars, such as those with the Cardassians and Tzenkethi, plagued Federation politics and was compounded by the discovery in 2364 of a bluegill-engineered conspiracy in Starfleet.

However the greatest threats were still to come. In 2365, Q aided in first contact with the Borg that led to attempts by the Borg to invade the Federation. In 2370, the Federation encountered the Dominion via the Bajoran wormhole that led to the Dominion War. The war saw a joint alliance of Federation, Klingon and Romulan forces defend the Alpha Quadrant against a Dominion-Cardassian-Breen alliance.

Following the war, Bajor was admitted to the Federation and the U.S.S. Voyager, lost in the Delta Quadrant for seven years, returned with advanced technology from the future. While initially the technology was put towards developing defences against the Borg, a lack of any activity from the Borg led to the Federation disbanding its Borg Task Force.

The Federation refocused its energies towards exploration, and criticised Klingon interventions in Romulan space during its civil war, as well as increasingly hostile acts by the Empire against its neighbours under the guise of fighting Undine infiltration.

Due to the Federation's disinterest in the Undine threat, and the Klingon's increasing militarism, relations between the two powers began to deteriorate. In 2409 the Klingons invoked an ancient claim on the Hromi Cluster. When President Aennik Okeg refused to cede the cluster, the Klingons invaded beginning a new Federation-Klingon War.

Fleet Admiral Jorel Quinn (left) and Chancellor J'mpok (right) agree on a cease-fire between the Federation and the Klingon Empire in 2410.

In 2409 the Federation found itself fighting on several fronts. The Borg invaded Vega Colony while the Romulans attempted an invasion of Vulcan. With further acts by the Undine, True Way, Terran Empire and Tholians; the Federation sought to solidify its relations with powers such as the new Romulan Republic.

Despite the conflict with the Klingons, all three powers would cooperate in actions against the Borg and on New Romulus. When an Iconian gateway was discovered, the three powers cooperated peacefully in the exploration of the Solanae Dyson Sphere beyond. At this point the Undine infiltration turned into a hot war that the Federation could not ignore, and Federation and Klingon forces fought in defence of each others homeworlds during an Undine invasion.

The heroic actions on both sides, and the recongition of the Undine, and by extension now Iconian threat, led to a formal cease-fire. The three powers formed the Alliance and began exploration of the Delta Quadrant via the new gateway network. While the Klingon war was now over, the Federation had to counter threats from the Vaadwaur threat (which it was, via Voyager, partly responsible for creating) in the Delta Quadrant and eventually Iconian forces themselves.

The Iconian War, while eventually won, led to the development of temporal technologies that both saw the Federation recognised as a temporal power and dragged it into the Temporal Cold War. 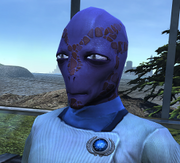 The United Federation of Planets (UFP) is a federal representative republic with its capital located in the cities of Paris and San Francisco on Earth (Vulcan Sector). The constitutional document of the Federation is the Federation Charter, which was signed in the 22nd century by founding members Andoria, Earth, Tellar Prime and Vulcan.

Its head of state and government is an elected President who, since 2392, has been Aennik Okeg. The legislature is the Federation Council and the Federation Supreme Court is its judiciary.

In addition to the main organs of state, a number of executive agencies operate such as the Department of Temporal Investigations. There are also unofficial agencies such as the rumored Section 31.

Federation members maintain a high degree of local sovereignty over their own affairs, and a certain degree of autonomous interstellar diplomacy. They often maintain their own local military forces for internal security and planetary defense.

Ambassadors from member worlds meeting in the 23rd century

Many species not part of the Federation also serve in Starfleet, including: Ferengi, Klingon, Ktarian, Talaxians, Xenexians and Photonic lifeforms to name a few. By 2409 the Federation has opened a dual-citizenship program for such applicants.