Hi, my name is CaptFredricks. I have been a fan of Star Trek for most of my life, and I was happy to hear that there was an online game based off the series. I joined the game in May 2012, and have loved it ever since. Feel free to send me a friend request in-game, if you want to play missions, or just hang out.

Other wikis I frequent[] 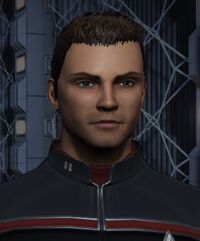 Jason Thomas Fredricks was born on 15 February 2386 in Winchester, Nevada, Earth to Thomas and Maria Fredricks.

He was admitted to Starfleet Academy in 2404. He earned the respect of many during his Academy training, including Fleet Admiral Jorel Quinn.

He graduated in 2408, and was valedictorian in his senior year.

Captain Masc Taggart chose Jason to be his tactical officer on the USS Leviathan after being impressed by his skills in weapon tactics. In 2409, nearly eight months later, Taggart was captured by Captain Kadek of the Klingon vessel I.K.S. Chot, and Commander Henry Fuller was killed by one of the Klingon officers. Being the next-in-line for command, Jason was forced to take charge of the Leviathan.

The son of D'Ghor, born on Qo'noS in the year 2358. As a young Klingon, Kardok joined a secret society that had plans for complete annihilation of the Federation. It was lead by a mysterious alien who called himself Xolor. In 2380, Kardok was given command of a prototype Klingon ship named the I.K.S. GhIqtal (the name means "to the death"), which was equipped with red matter. His mission was to use this on Sol, causing a supernova that would wipe out Earth and the Federation. His attempts to do so were foiled by the cunning of Captain Jean-Luc Picard and the U.S.S. Enterprise-E. When word of his treachery reached Qo'noS, Kardok was exiled from the homeworld forever.

Little was known about his whereabouts until 2404, when he saved the life of Chancellor J'mpok, and was permitted to return to Qo'noS. In 2405, the House of D'Ghor became the House of Kardok. Since then, he has been devoted to reclaiming his honor that was lost many years before.

In 2409, he was promoted to Commander and given command of his own ship, the I.K.S. Qo'noS. He still has much indignation toward the Federation, but he has gained respect for a few "honorable" Starfleet officers.

Joseph Valkyrie, a human Starfleet officer, married a Romulan woman named T'Mer in the year 2391. Their daughter, Rhiana, was born in 2392. At that time, he was on a deep space assignment. When he returned two years later, T'Mer had vanished without a trace. He sent Rhiana to live with her uncle on Virinat, and he set out to find his missing wife. He began his search on the edge of Romulan space, where his shuttle was attacked by Tal Shiar agents. He was never heard from again.

Rhiana's uncle raised her as his own daughter. Even to this day, she believes he is her father.

Lucas was born in Carson City, Nevada on Earth in 2385. He first met Jason Fredricks in 2395 on a camping trip. The two quickly became friends and spent much time together in the next several years.

In 2396, Lucas began showing interest in science, especially chemistry and physics. He won several school awards for his thesis on Einstein's theory of relativity in 2401.

He earned several scientific awards during the Academy, including an impressive science experiment he conducted in 2407.

He graduated in May 2408 along with Jason Fredricks, Dylyp Azeli, Tala Jones, and Lenerea Mendel. He was assigned to the U.S.S. Leviathan in 2409.