I'm really enjoying STO and have come to this site many, many times for reference information. Since I have a few characters at max-level, I began creating new 'toons and thought I would do a little exploring around the maps and ogling at the pretty sites. When I was browsing the wiki I noticed that there were very few pages for the planets and systems that I was exploring. So, after a bit of consideration, I thought it would be neat to help out.

While others have focused on game mechanics, ships or skills, my primary focus has been on cataloging the star systems, planets and stellar objects. Recently, I have been concentrating on the star systems in the "System Patrol" missions as they are non-repeatable and a character only has one opportunity to "see the sights". Nevertheless, there are still significant gaps in the visual record of even the basic story missions. I will continue to fill this void as leisure time permits.

It is my sincere hope that others will continue to build on these relatively ignored but beautiful sites.

This page is an attempt to provide a quick and easy visual reference to what I have contributed. I have made a conscious effort to attempt to hide or remove my ship or character from the screen shots whenever possible. This has been done to create the illusion of objectiveness and a more 'photo-journalistic' style (i.e. "this is the Tazi system" and not "this is ME at the Tazi system"). I'm still an amateur at wiki script and protocols, so please tolerate my blunders while I figure out how to do stuff. :O

I hope you find the screen shots to be as beautiful as I do. Thanks for stopping by! 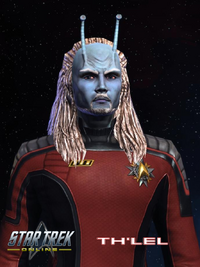 He's my first STO toon and my favorite. If it is true that everyone has a skill, his skill is blowing shit up. XD

It's good that he has that, at least, because he's a complete idiot at everything else. He can't make his tricorder work right and a perfectly good scientific explanation is completely wasted on him.

He has quite an ego, but the only saving grace for him is his self-deprecating nature so he never comes off as arrogant but as sympathetic. You laugh with him instead of at him. Even though he's made every mistake in the book he never gives up and he never surrenders.

He also has about 47 child-support cases pending in at least three different sectors (that we know of). ;)

Currently in inactive status, he trains tactical skills for other up-and-coming Captains. He spends much of his time at Starfleet Academy or enjoying the brisk, cool air of the High Mountain Park on his homeworld of Andoria.

(since he was my first toon, i made every mistake and did absolutely everything wrong in the game - he was my learning tool. he's been reworked so many times but always came out on top - that's why he's my favorite) 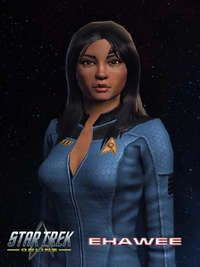 My second STO character, this portrait is perfect for her. Constant, accurate and intense, Kaya will look right through you.

She was born on Dorvan V shortly before the end of the Dominion War. Suffice it to say, it was not an "ideal" home life for a young girl. She's done many things to survive that she would rather not ever think about again, much less share with anyone else. Sometimes she still has to grasp with those demons from her past.

At first she's unassuming but she will quickly surprise you with what she knows and what she can do because she never brags about it. Some take her reservation as passivity and underestimate her.

She may be quiet, but she's certainly not shy. When she does speak up, you better listen because she knows what she's talking about.

(Some of her crew say that she keeps Cardassian neck bones in her medicine bundle - but noone is quite for sure.)

You can find Ehawee (when you can find her) at Memory Alpha where she trains officers in advanced science skills. However, she's normally leading the U.S.S. IxChel to new discoveries out on the Rim.

...Kaya is my attempt to make a Native American / Latina. I think she came off perfectly and she is so, so, SO beautiful. I'm smitten by her. (Is it wrong to be smitten by your own creation?) 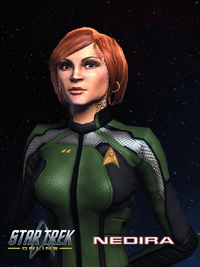 A smart, gifted, and talented Joined Trill, Raine has it all - with a ego to go with it. She likes what she likes and she has no problem telling you when she doesn't.

The collected knowledge and experience of her symbiote contributes to her innate gifts and sometimes she can come off as (quite) arrogant. If she wasn't right all the damn time, she would learn some humility faster.

These traits do serve her well as a leader. However, she still has a long way to go to the top. She will have to learn things the hard way unfortunately. But, when she does she will be unstoppable.

She's the most "Kirk-like" of my characters. Janeway-esque if you will. My daughter helped me with her name and appearance and I think that she's unique and beautiful. Her countenance actually reminds me of a doctor that I work with occasionally.

lol - I never imagined I'd have so much fun with this. The postures in STO were revamped recently with Season 5 and they are much more natural and expressive. I gave her a "thoughtful" pose and when I was taking snaps for her portrait she came off as haughty and it was a springboard for her personality description. You can see it in her picture!

Isn't it funny how it feeds back on itself?

Due to the skill tree changes, her passive skills that I had previously selected were made completely ineffective. Sadly, it was necessary to completely remake her character (and not very happy about it either).