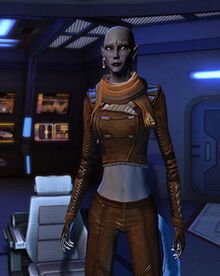 Originally from the Andromeda Galaxy, Nayzea vas Raama is one of few Aloh-Haii that came to the Milky Way Galaxy as an explorers and traders few years ago. As a highly skilled trader and diplomat she was send by a Circle of Alohhes, official representative body of Aloh-Haii System Alliance, to establish new diplomatic relations and to negotiate trade agreements.

Ancient records of her people says that their ancestors came to Andromeda Galaxy from neighbouring spiral galaxy after series of catastrophic defeats from race described as "howering demons with legs in dark mist". Faced thread of genocide from their merciless enemies, they constructed massive gateway based on reverse-engineered Iconian technology which allowed them to relocate to a safe undisclosed place on the very edge of Milky Way Galaxy. With homeworld and all colonies lost, they used that place as a staging ground for a massive relocation to another galaxy, out of grasp from their nightmarish enemies. Undetected in their distant exile, armada of colony ships was made and after three decades of preparation they left our galaxy seeking a new place to grow and prosper once again.

Not many is known about them. Based on the unclassified records Aloh-Haii System Alliance is one of major powers in the Andromeda Galaxy, highly technologically advanced, with incredible average lifespan of almost 900 years. Their society is based on clans, with no central government. Their believes are very similar to the Bajorans. Based on that and many other clues it is beleived that their original homeworld was located somewhere in Beta Ursae Sector Block at the Bajor Sector or in Rolor Nebula. No corresponding archaeological sites had been found yet.