The bridge is a central hub for starship Science, Tactical and Engineering operations; it is where the commanding officer issues commands and controls his or vessel from. In Star Trek Online players can visit the bridge of their vessel doing the following:

Energy Credits to change their bridge by visiting starship customization officers who are located at major hub points around the quadrant, such as the Earth Spacedock and Deep Space Nine. When a player receives a new ship they are given the Standard bridge design. The higher the ship tier, the more bridge designs the player may choose from; some bridge designs (Escort Bridges, Cruiser bridges, and Science Vessel bridges) are also specific to the type of ship that the player is using. Many additional Bridge layouts may also be purchased in the Cryptic Store‎.

The Bridge is also the access point to the interior of the player's vessel, via the door to the Captain's Ready Room or the turbolift to the crew decks and Engineering. Currently the only non-social function of the ship interior is to access Mission Replay feature through the computer on the desk in the Captain's Ready Room. Socially, the bridge and all associated interior locations are used as meeting places for trade (as the bridge invitation function can draw a player from across the galaxy,) for roleplaying and other private gatherings. Cryptic have stated in the past that they plan to add more features to the bridge at some point, but it is not known if the Mission Replay is the extent of their intentions in that regard or merely the beginning.

The interior of the player's ship, aside from the model of bridge in use, may be customized to a limited extent. The Layout of the ship may be chosen between three different sizes: Small, Medium and Large, of which Medium is the default. The only difference between the layout sizes is the amount of distance one has to travel to reach the locations on each deck, and on the Medium (but not the Large or Small) crew deck, the Lounge has both doors connected to the main corridor.

Aside from the bridge, the player can access two decks: the Crew decks and Engineering. The Crew Deck contains the ship's Lounge, Sickbay, and access to the Captain's Cabin. Ship Interior#Engineering grants access to Main Engineering, the Science Lab and the Transporter Room. All decks, naturally, have a turbolift.

There are at least 43 separate Bridge models in existence for Federation players to choose from, divided into twelve discrete bridge packs within which the individual bridges are variations on one another. The majority of these bridges must be purchased from the Cryptic Store at a cost of Cryptic Points.

Available to all players for use on all ships, the Basic bridges consist of the Standard bridge, which is the default bridge, and the Sleek, Utility and Future bridge, all of which are variations on the Standard bridge. They are characterized by their barren nature and cool color schemes. 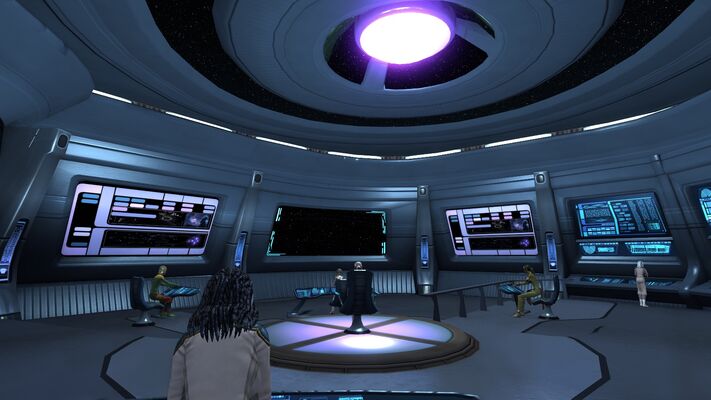 Escort Bridges are available only for use on Escort vessels. They are closely patterned on, though not exactly identical to, the bridge of the Defiant-class escort U.S.S. Defiant, as it appears in the television show Star Trek: Deep Space Nine. The available bridge models are the Strategic, Victory, Defiant (appropriately enough) and Vivid, which range the color spectrum from chill to hot. 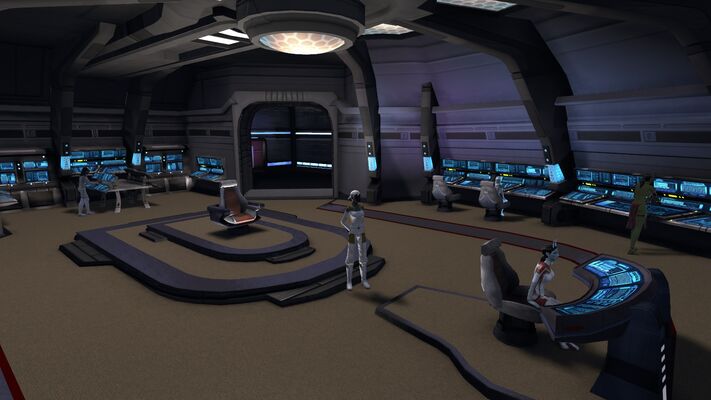 Cruiser bridges are available only on vessels of the Cruiser classes. They are influenced by, though not terribly close to, the bridge of the Galaxy-class starship U.S.S. Enterprise (NCC-1701-D), the iconic vessel featured in the television series Star Trek: The Next Generation and the movie Star Trek: Generations. The available bridges are Classic, Triumph, Battle and Prototype, which range the color spectrum from cool to hot and are characterized by the feelings of familiarity and dissimilarity to the bridge that those who remember the television series will experience when viewing them. 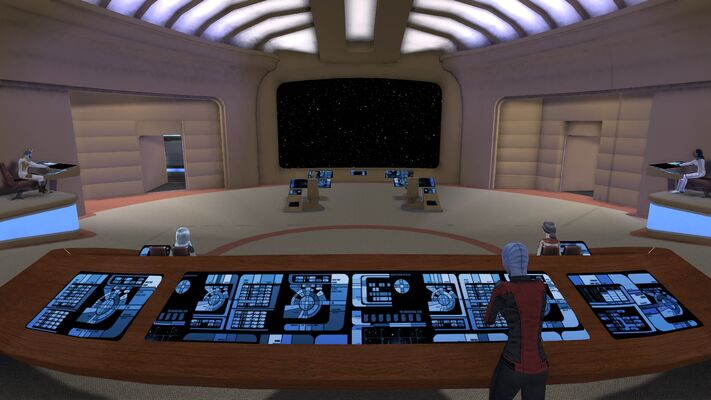 The Prototype Bridge, view over the main console.

Science bridges are only available choices for a Science vessel. They are heavily influenced by, but not precise copies of, the bridge of the Intrepid-class starship U.S.S. Voyager from the eponymous television series. The Delta, Wanderer, and Explorer models of bridge are available, presumably as references to that same vessel's wanderings in the Delta Quadrant. 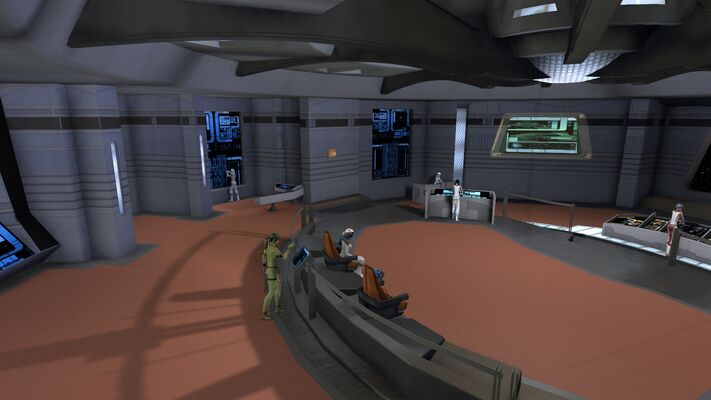 Diplomat-series Bridges (the Cryptic name for this pack of related bridges is unknown) are bridges that a player receives access to later in the game at a milestone which is not yet known. They are broad and spacious, characterized by their functional, tiered layout and reinforcing pillar design, with color schemes ranging from cool to warm. They are the Diplomat, Star Explorer, Alliance and Ceremonial bridges. 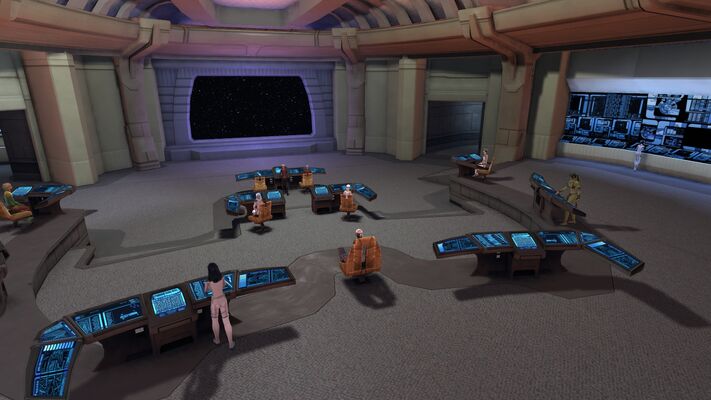 The Defiant pack of bridges, which bears only some relationship to the Defiant bridge available to all Escorts, is a close cousin to those bridges, but bears less relationship to the bridge of the U.S.S. Defiant from Star Trek: Deep Space Nine. The three bridges in this pack are Warship, Utopia and Key. They are characterized by their large upright master systems display with its faces to the sides of the bridge, and range the color spectrum from warm to cool. 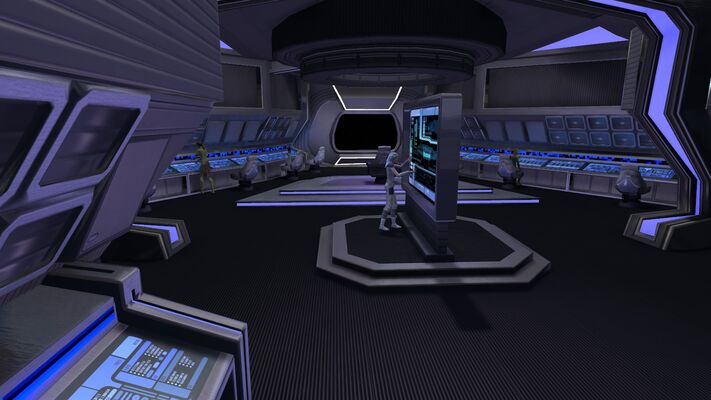 The Utopia bridge, view from the stern.

The Emissary pack of bridges contains the largest bridges available in Star Trek Online. The four bridges are Unity, Temple, Nomad and Virtue, and they have the most variation within their pack in terms of the objects in use and the locations of those objects, as well as the number of crew on display. They're characterized by the busy nature of their furnishings and the large upright displays that break up the lines of sight. The color spectrum ranges from neutral to chill. 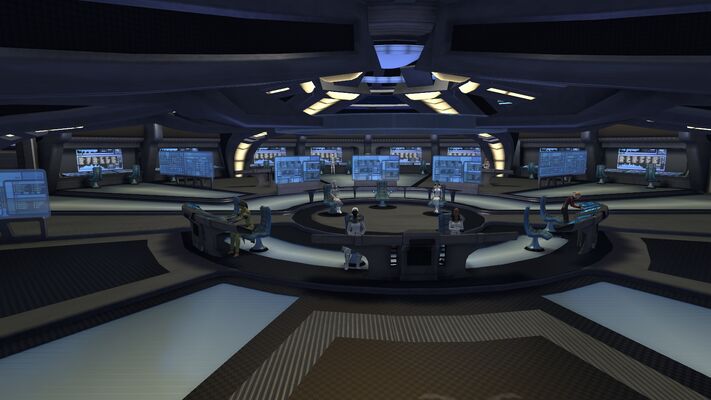 The Galaxy pack of bridges contains the bridges that most closely mirror the bridge of the Galaxy-class starship U.S.S. Enterprise (NCC-1701-D). Though marginally larger than the Cruiser bridges that they're so closely related to, they follow the same general layout. They feature two stations on raised platforms at the sides of the bridge which were not present on the Enterprise, but are otherwise close replicas. The three bridges in the pack are Order, Justice and Triumph, of which Order is the closest relation, keeping the familiar color scheme. 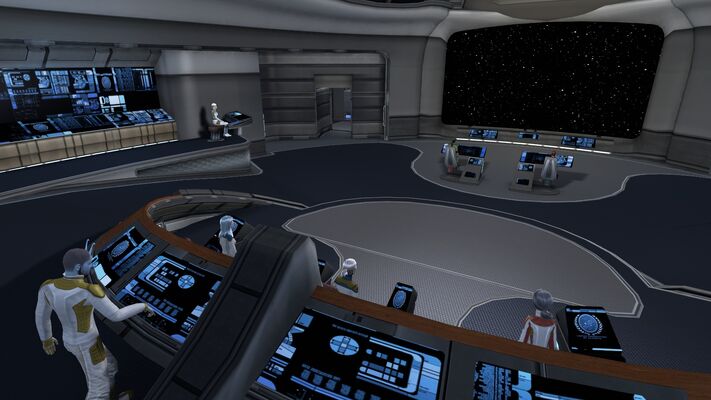 The Miranda bridge pack contains some of the most unique bridges available in Star Trek Online. In size they're identical to the basic bridges, and the layout is largely the same, but the Miranda bridges are much less barren in character. Two of the bridges in this pack, Alpha and Beta, are the only bridges to feature rear-facing crew posts, and these two bridges feature highly unique group workspaces. The third, Gamma, if characterized by it's starkly minimalist consoles. In color schema, they range from neutral to warm and dark. 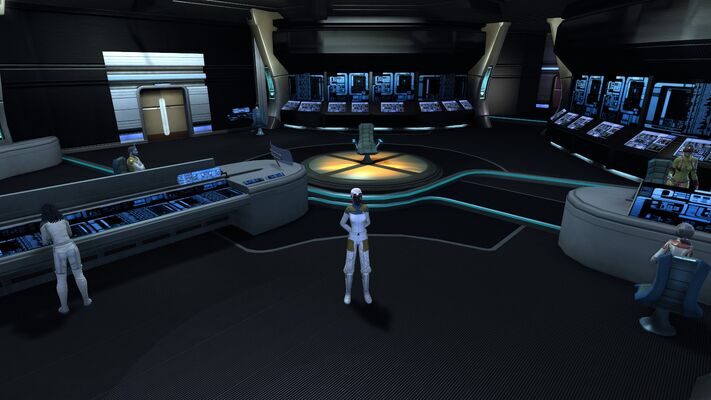 The Beta bridge, as seen from the main viewscreen.

Oddly enough, the Intrepid bridge pack's bridges bear no relationship whatsoever to the bridge of the Intrepid-class U.S.S. Voyager. Characterized by their temple-like nature and utter dearth of seating, the Intrepid bridges (which range from cool to cozy-warm in color scheme,) are Fellowship, Peace and Brotherhood, featuring unique control stations wrapped around pillars with extended flat-panel consoles. Some such consoles require the crewperson using them to kneel upon the deck, and generally the bridges seem as if they would be more appropriate to the Operations center of a space station than a working starship. The Intrepid bridges also feature an in-bridge Transporter chamber with a pad for one. 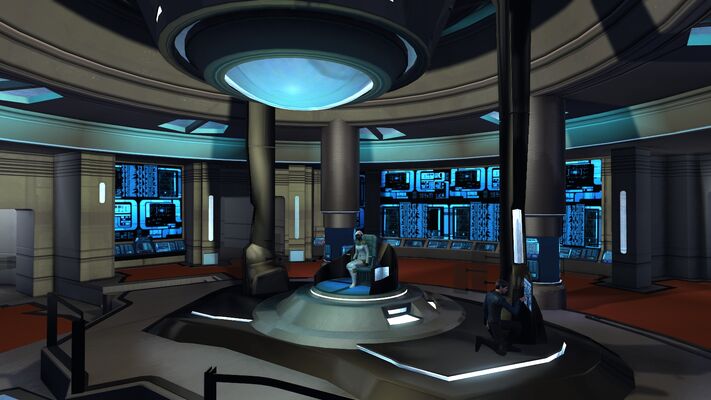 The Destiny bridges are intended for use with Research Science Vessels, featuring the Master Systems Display of an Olympic-class starship. Characterized by their elegant, curvaceous architecture and absolute lack of seating other than the Captain's chair, the Destiny bridges are Compassion, Assistance, Chirurgeon and Healer, and range the color spectrum from chill to neutral. 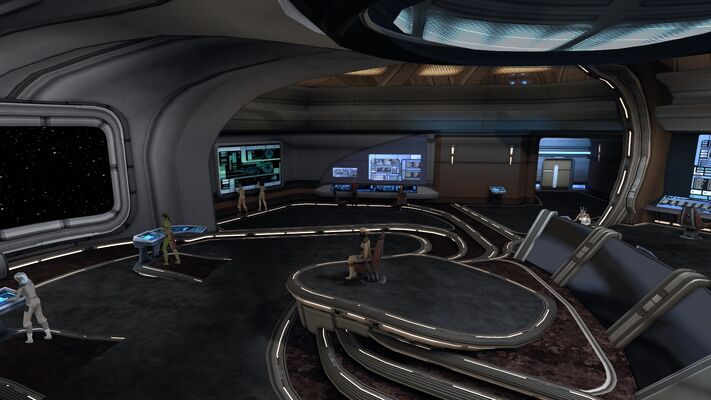 Featuring the Master Systems Display of a Prometheus class vessel, the Prometheus bridges are Blaze, Atlas, Pandora and Caucasus, they're characterized by their small, round lay-out and placing the captain high on a pedestal above the crewmembers manning the fore console in a pit, and range the color scheme from cold to hot. 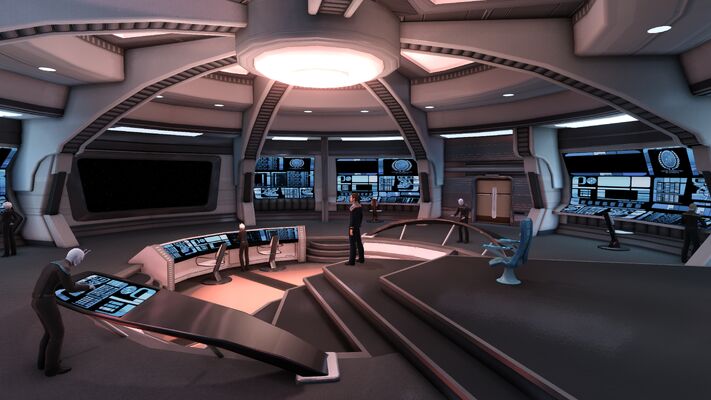