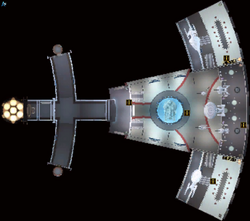 The shipyards, destroyed by Synth forces in 2385, have been rebuild prior to 2409 and are now defended by the 3rd fleet.