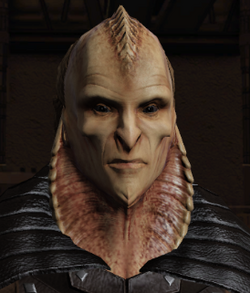 The Vaadwaur are a warlike race originating from the planet Vaadwaur Prime in the Delta Quadrant. They once ruled a vast interstellar empire, the Vaadwaur Supremacy, until they were driven to near extinction by the Turei and their allies in the 15th Century.

They are characterized by small ridges on their chin and two horizontal ridges just above their nose. The ridges on the Vaadwaurs' faces give them very sharp features. A large fin-like crest runs across the center of their foreheads, becoming wider as it reaches the top of their skulls. Their hair grows from around the mid-region of their skull, just where their fin ridge seems to end. Neck ridges extend from their ears, down along their neck and onto their shoulders where they curl in towards the center of their chest. This gives the neck ridges a cobra-like appearance overall, somewhat similar to Cardassians.