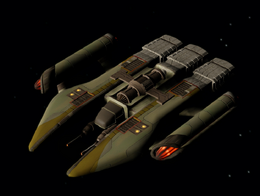 The Vaadwaur Pythus-class Fighter is a Tier 1 (Level 1) Small Craft which may be flown by characters of any faction.

. The boxed ship is not bound and so may be traded to other players or bought and sold on the Exchange for energy credits under the name [Special Requisition Pack - Vaadwaur Pythus Fighter].

Ships of the Vaadwaur Supremacy emphasize the frontal assault and overwhelming tactics favored by Vaadwaur commanders. Their dedication to warfare allows these starships to remain formidable foes, even though portions of their technology could be considered antiquated by modern definitions.

Additionally, the Pythus Fighter also comes with an Integrated Beam: Overload I ability. This ability doesn't require a Bridge Officer to use, but it has a longer recharge time than normal.

Fighter come with Standard Issue-S equipment and weapons that scale with the player.