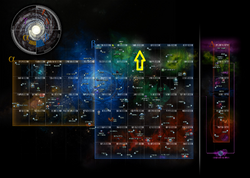 The Vhoran System is a system located in the Dimorus Sector of the Beta Quadrant.

Vhoran Prime is a former Iconian colony and Iconian artifacts have been found there. It is believed a gateway may be found if portions of the planet are excavated.

The Vhoran system is comprised of three planets orbiting a yellow dwarf star. Vhoran Prime is Class L, and a team from the Federation Science Council has been conducting planetary surveys there with the permission of the Romulan Star Empire. If the planet is not found suitable for full colonization or resource gathering, it may be a candidate for terraforming.