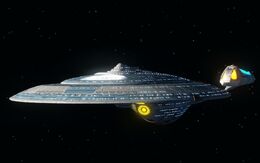 The Vizier-class Command Assault Cruiser is a Tier 6 Cruiser which may be flown by Starfleet characters, including Federation-aligned Romulan Republic and Dominion characters. All faction restrictions of this starship can be removed by having a level 65 KDF character or by purchasing the Cross Faction Flying unlock from the Zen Store. This starship can be used from any level upon completion of the tutorial experience. As you level up, this ship gains additional hull, weapon slots, and console slots.

Players can obtain this starship by claiming it from the "Events" UI after purchasing the WizKid model of the U.S.S. Enterprise during a special cross-promotion. Players who earn this ship through its associated Event may visit the “Reclaim Rewards” store, accessible via the "Events" UI, to reclaim this starship on any character on the account.

as part of "Mudd's Market", though it periodically goes on massive discounts (upwards of 60% to 85% during special promotional sales).

Based on the success of the Sovereign-class Assault Cruiser, the Vizier-class Command Assault Cruiser has been retrofitted with state-of-the-art technology. Unlike most other Starfleet Cruisers, the Vizier's bonus subsystem power grants +10 to Weapons and +5 to Shields and Auxiliary.

The Vizier-class Command Assault Cruiser includes the Metreon Gas Warhead Launcher universal console. This console is part of the Starfleet Assault Cruiser Technology Set; the Vizier can equip other items from this set as well.

The Vizier-class Command Assault Cruiser also comes equipped with a [Wide-Angle Quantum Torpedo Launcher]. Like the [Voth Transphasic-Chroniton Torpedo Launcher], this weapon has a firing arc of 180°, twice that of a standard torpedo launchers.

Starfleet starships come with standard equipment and weapons of the lowest mark available at the ship's minimum rank. The items provided are appropriate to the type of vessel and its related playing style.

By using an [Experimental Ship Upgrade Token], the Vizier-class Command Assault Cruiser may be upgraded to T6-X, unlocking an extra ship device slot, universal console slot, and the ability to slot an extra starship trait.