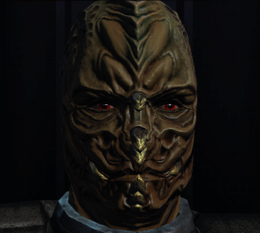 Commander Vizimar is a Lethean and a member of the Klingon Defense Force. He is stationed aboard the I.K.S. Chang and formerly offered Klingon Empire players various Special Task Force missions.

Although currently on light duty, Commander Vizimar is still active aboard the Chang, and can still be contacted there.