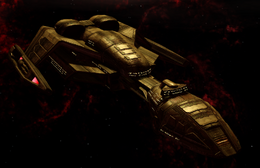 This article is about the playable starship. For the NPC vessel, see Vo'Quv Dreadnought.

The Vo'Quv-class Carrier is a Tier 5 (Level 40) Science Carrier which may be flown by Klingon Defense Force characters, including Klingon Empire-aligned Romulan Republic and Dominion characters. All faction restrictions of this starship can be removed by having a level 65 KDF character or by purchasing the Cross Faction Flying unlock from the Zen Store.

The largest and most powerful ship ever created by the Klingon Empire, the Vo'Quv-class Carrier is a monster. Unlike most other Klingon vessels, the Vo'Quv class does not have any cloaking technology so it cannot hide itself in or out of combat; however, it makes up for this in comparison to vessels like the Raptor or Klingon Bird-of-Prey classes due to its sheer power and strength.

Hangar pets, such as the To'Duj-class fighters, give the carrier a unique style of play. Hangar bays allow the players to deploy varying types of pets to do various tasks. These include, but are not limited to, providing direct damage firepower support, repairing the carrier itself, or weakening and disabling enemies. When the launched carrier pets have been destroyed the player can launch another wave after a short period of time.

The Vo'Quv Carrier is also one of the ships that can equip large Bird-of-Prey frigate pets. These frigates are equipped with Disruptor Dual Cannons, Disruptor Turret and Photon Torpedo Launcher, and can use Cannon: Rapid Fire I, Torpedo: High Yield I, as well as Battle Cloak.

The Advanced variant of the To'Duj Fighters and the Birds-of-Prey can be obtained from the Dilithium Store, while the Elite variant is obtainable from the Fleet Starbase with unlocked Tier V Communications Array.