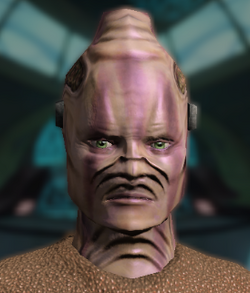 The Vorgon are a humanoid, warp-capable species that, by the 27th century, had become involved in the Temporal Cold War.

By the 27th century, Vorgons were fighting against other major species of the Galaxy for control over time travel.

During the 27th century, Vorgons tried to steal a quantum phase inhibitor called the Tox Uthat from its inventor Kal Dano. They were stopped by a Temporal Agent Daniels who allowed Dano to flee into the past. After recovering the device from the Tholians, who used it to destroy the Na'kuhl homeworld - Kal Dano, assisted by the Alliance agent from 2410, hid the device on Risa sometime in the early 22nd century.

Vorgons found out that Tox Uthat was hidden on Risa and sent Boratus and Ajur to retrieve it, but their plan failed when Tox Uthat was found, and then supposedly destroyed by Starfleet captain Jean-Luc Picard.

At some point during the Cold War, Vorgons sent agents into the past who, for reasons yet unknown, left behind data plans for a Vorgon Xyfius Heavy Escort on Risa. These plans were recovered in the 25th century by the Alliance agents working for Qwen.

Not much is known about Vorgon or their military in the 25th century. However, by 27th century, Vorgon have developed advanced technology and equipped their ships with tetryon and chroniton weaponry. Their vessels are also often outfitted with probes that can be deployed to assist in combat.