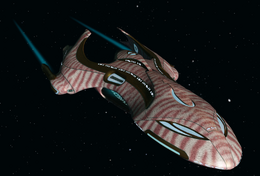 This page is for the playable starship. For the NPC vessel, see Vorgon Frigate.

The Vorgon Xyfius-class Heavy Escort is a Tier 6 Escort which may be flown by characters of any faction. This starship can be used from any level upon completion of the tutorial experience. As you level up, this ship gains additional hull, weapon slots, and console slots.

Players can obtain this starship from the Phoenix Prize Pack, for 1 [Epic Prize Token - Phoenix Prize Pack]; this ship box cannot be sold or traded. Those who obtained it from a previous (2016) Lohlunat Festival event for 1000 Lohlunat Prize Vouchers may find this vessel in the “Reclaim Rewards” store, accessible via the "Events" UI.

The Risian Hospitality Association has partnered with the Lobi Crystal Consortium to offer a Vorgon Xyfius-class Heavy Escort. The Xyfius class offers the latest breakthroughs in advanced automation options to harass enemy ship commanders. The Vorgon Xyfius Heavy Escort was designed to pursue, cripple and destroy its targets. The Xyfius is quite durable for a ship of its class; this durability comes at the cost of reduced maneuverability.

The Xyfius Heavy Escort was a vessel utilized by the Vorgon during the Temporal Cold War, also known as the 'Xyphius' and, until the actual Vorgon name of the class was learned, the 'FNORD-class'.

At some point during the Cold War, the Vorgon have sent agents into the past who, for reasons yet unknown, left behind data plans for a Vorgon Xyfius-class Starship on Risa. These plans were recovered, later, in the 25th century by Alliance agents working for Qwen.

Among the found schematics were starship deck plans, auxiliary system files, defense data, power and weaponry schematics. These data plans were so detailed that the Alliance could, with enough manpower, build this class of starships by themselves.

This ability is part of the Vorgon Weapon Expertise Set, which also includes [Console - Universal - Subphasic Defense Drone] and [Console - Universal - S.I.F. Inverter] obtainable with Vorgon Ryn'kodan Carrier (T6) and Vorgon Ytijara Dreadnought Cruiser (T6), but can also be equipped on the Vorgon Xyfius Heavy Escort. For each console added after the first, an additional passive bonus is unlocked.

The Vorgon Xyfius-class Heavy Escort comes with an Experimental Weapon slot. This additional slot does not fit standard weapons. Unlike standard starship weapons, Experimental weapons are not affected by weapon firing modes, such as those granted by bridge officer abilities.

By using an [Experimental Ship Upgrade Token], the Vorgon Xyfius-class Heavy Escort may be upgraded to T6-X, unlocking an extra ship device slot, universal console slot, and the ability to slot an extra starship trait.