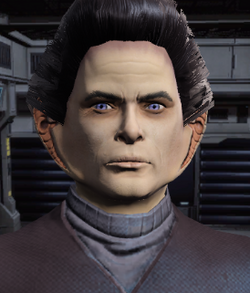 The Vorta are a humanoid species genetically engineered by the Founders of the Dominion to act as field commanders, administrators, scientists and diplomats. The Vorta see themselves as those who "serve the Founders."

According to the Dominion's Masan Research Reports, the Vorta were a race of tree-dwellers, hunted as the Changelings once were. The genetic engineering of that species into the modern Vorta were the Founders' first project and resulted, among other things, of an increase in intelligence of at least a factor of three. They were the first of many loyal subjects and were there to guide other subjects such as the Jem'Hadar.

This was believed by the Vorta, perhaps apocryphally, that this was a reward for a group of the Vorta's ancestors hidding a Changeling from an angry mob. The Changeling they saved promised that one day they would be transformed and placed at the head of a vast interstellar empire. The Founders fulfilled this promise by genetically changing the Vorta into humanoids and employing them at the highest level of the Dominion, second only to the Founders themselves.

Vorta are typically clones of early 'versions' of themselves and serve the Founders in roles of importance such as commanders and diplomats. Vorta are similar to Humans except mainly for their ears and eyes. They have long vented ears which increases their hearing ability above that of regular humanoids. Their eyes are typically poor in terms of sight, and are normally purple in colour. Vorta are commonly seen commanding squads of Jem'Hadar.