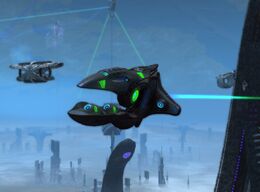 The Voth Heavy Fighter is a Tier 1 (Level 1) Small Craft which may be flown by characters of any faction.

. The boxed ship is not bound and so may be traded to other players or bought and sold on the Exchange for energy credits under the name [Special Requisition Pack - Voth Heavy Fighter].

This is an incredibly tough fighter craft that is among the most durable within its class. However, it sacrifices maneuverability for this additional level of survivability. Voth Heavy Fighter comes with the innate Integrated Hazard Emitters. This ability, like standard Hazard Emitters, will restore hull hit points over time and cleanse hazards/debuffs. Unlike the bridge officer power, Integrated Hazard Emitters has a longer cooldown and can only target the caster.

The Voth Heavy Fighter comes equipped with Standard Issue-S equipment and weapons that scale with the player that cannot be equipped on any other type of vessel.