Star Trek Online Wiki
Register
Don't have an account?
Sign In
Advertisement
in: Factions, Confederacy of Vulcan, Races,
and 3 more 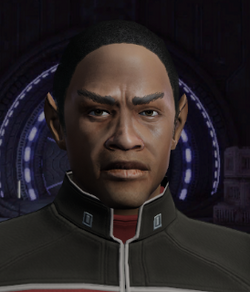 This article refers to the Vulcan species. You may instead be looking for the planet Vulcan.

Vulcans are a humanoid species native to the planet Vulcan. They were one of the founding races which created the United Federation of Planets, along with Humans, Andorians and Tellarites. Vulcans are a playable race in Star Trek Online, and belong to the Federation faction.

In appearance, Vulcans are very similar to Humans, except for their pointed ears and upwards pointed thick eyebrows. They are more similar in appearance to Romulans, as both originated from the same species. Vulcan males very rarely have facial hair such as beards. Vulcans tend to have pale skin, sometimes with a slight green tint; however, Vulcans with dark skin are not unheard of, such as Tuvok. A Vulcan lifespan is about two centuries. They are also physically very strong, with natural strength up to three times greater than that of the average human.

Vulcans are very well known for their strict adherence to logic and for their honesty. It is said that Vulcans do not lie, and some say Vulcans are incapable of lying; however, they will should they deem it to be the logical solution to a given situation. Although Vulcans are very logical beings, they still have spiritual beliefs. Some Vulcans still undertake arranged marriages, which are typically arranged by the parents when the child is still of a young age, normally under 10 years old.