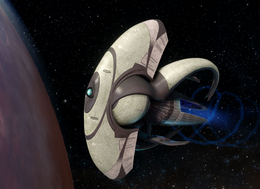 The Vulcan Experimental Scout Vessel is a Tier 6 Scout Ship which may be flown by characters of any faction. This starship can be used from any level upon completion of the tutorial experience. As you level up, this ship gains additional hull, weapon slots, and console slots.

Players can obtain this starship from a [Special Requisition Choice Pack - Tier 6 Promotional Ship Choice Pack], which has a very rare chance to drop from a [Promotional R&D Pack] or a [Promotional Duty Officer Pack]. This box is bound to you until a ship is chosen. The boxed ship is not bound and so may be traded to other players or bought and sold on the Exchange for energy credits under the name [Special Requisition Pack - Vulcan Experimental Scout Vessel].

This ship could also be purchased as an account-unlock from the Zen Store as a possible choice from the Mudd's Into Darkness and Beyond Choice Pack as part of "Mudd's Market", available from June 10th, 2021 to November 24th, 2021. Like all items in the Market, the Bundle periodically goes on massive discounts (upwards of 50% during special promotional sales).

The Vulcan Experimental Scout Vessel (informally, the Jellyfish) began as a highly maneuverable vessel, built for the Daystrom Institute by Geordi La Forge at the Vulcan Science Academy. It was designed to withstand environmental conditions that would destroy most other ships; intended to serve as a test bed for various experiments and scientific exploration.

In 2387, the Jellyfish was used by Ambassador Spock to deliver red matter to the Hobus System, creating a black hole that consumed the Hobus supernova and ended its threat to the galaxy. Spock was attacked by Captain Nero of the Narada moments later; in his attempt to escape both vessels were pulled into the black hole and are presumed destroyed. The Jellyfish, as it became known, more than carried its weight in these events, with incredible maneuverability to keep it safe and torpedo launchers as a primary defense mechanism.

The Vulcan Experimental Scout Vessel comes with the [Red Matter Capacitor] in its Device slot.

By using an [Experimental Ship Upgrade Token], the Vulcan Experimental Scout Vessel may be upgraded to T6-X, unlocking an extra ship device slot, universal console slot, and the ability to slot an extra starship trait.