The Vulcan Lirpa is a traditional Vulcan melee weapon. It consists of a metal staff with a fan-shaped blade on one end and a club at the other. They have been used both by Vulcan special forces and in ancient Vulcan ceremonies such as the Kal-if-fee.

Lirpas are melee weapons that have a variety of strikes when when used in a combination series.

Uncommon, Rare and Very Rare Vulcan Lirpas are obtainable as random drops in ground missions and in the Mission: Coliseum.

Mission Reward from “Hearts and Minds”

This is bought from the Holiday Item Vendor during Q's Winter Wonderland. It comes in different color variants.

This is bought from the Holiday Item Vendor during Q's Winter Wonderland. It only works against snowmen during the Winter activities and cannot be used in regular combat. 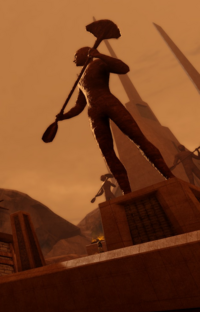 Note: Combo information is incomplete due to testing limitations.

There are seven factors that can affect personal weapons. These are Modifier suffixes, spent Player Skill Points, Personal Equipment, and Equipment Sets.