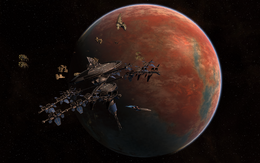 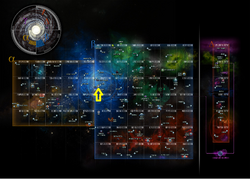 The Vulcan System is a system located in the Vulcan Sector of the Beta Quadrant. One of its planets, Vulcan, is the homeworld of the Vulcan species and the Sehlat, as well as a founding member of the United Federation of Planets.

The second planet in the 40 Eridani star system, Vulcan orbits the primary K-class star, as do two smaller stars. It is a harsh desert world, with many active volcanoes and towering mountain ranges. Its atmosphere is thin and the gravity on Vulcan is higher than that of Earth. The Vulcans have adapted to this harsh world, developing great strength and endurance.

The Vulcan System consists of at least three planets, one of which revolves around the sun on an eccentric orbit. Vulcan has no moon and there are no anomalies in the system. A Starfleet space station with adjacent dry docks is located in the planet's orbit, and numerous starships - most of them D'Kyr Science Vessels - are often sighted patrolling the system.