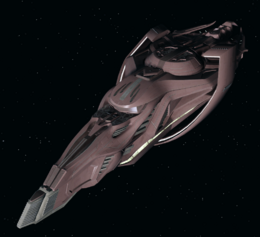 The Vulcan T'Pau-class Scout Ship is a Tier 6 Scout Ship which may be flown by characters of any faction. This starship can be used from any level upon completion of the tutorial experience. As you level up, this ship gains additional hull, weapon slots, and console slots.

Players can obtain this starship from the Phoenix Prize Pack, for 1 [Epic Prize Token - Phoenix Prize Pack]; this ship box cannot be sold or traded. Those who obtained it from a previous 9 Year Anniversary event for 1000 Anniversary Prize Vouchers may find this vessel in the “Reclaim Rewards” store, accessible via the "Events" UI.

(price subject to discounts) as part of "Mudd's Market". It was subsequently moved to the Phoenix Prize Pack as a per character unlock. Players who purchased this ship via Mudd's Market can continue to reclaim this starship on any character on the account, via the "Ships" tab of the Market.

Named after one of Vulcan’s greats, the T'Pau-class is a truly logic-driven design for a scout ship, with flexible seating to adapt to the situation at hand, high mobility to efficiently cover space, powerful primary and secondary deflectors to protect the vessel thoroughly, and powerful combat capabilities to deter any outside forces from interfering with its mission.

By using an [Experimental Ship Upgrade Token], the Vulcan T'Pau-class Scout Ship may be upgraded to T6-X, unlocking an extra ship device slot, universal console slot, and the ability to slot an extra starship trait.