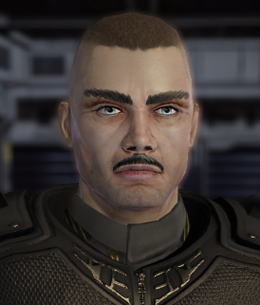 The Warden is a Photonic Starfleet officer in command of the Facility 4028 prison facility, which is staffed almost completely by photonic personnel.

The "Warden" hologram has been modeled after Hadrian Vosker who served as the Warden of Facility 2047 in the mid-23rd century, during the Federation-Klingon War, and was in charge of safeguarding and interrogating the most important prisoners of war.

He does not have a proper name, as his programmers believed it would make him less approachable, and therefore that the inmates would not consider him a target for manipulation. He notes the irony that he and the rest of the photonic staff do not have names, while the prison's computer, I.S.I.S., does.