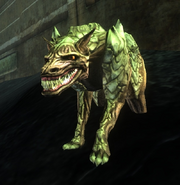 A warrigul on the moon Khoal.

Warriguls have been encountered in arid regions, such as the Nopadan desert canyon.

Like Jackal Mastiffs and Sehlats, warriguls live in packs and can be domesticated. There is no visual difference between wild and tamed warriguls. Warriguls look like dogs with lizard features. Their back and flanks are covered with large scales or keratin plates. The skull is elongated and the flew is always withdrawn, thus warriguls are unable to cover their sharp teeth with skin.

The name "warrigul" comes from an alternate name for the Australian dingo in one of the various indigenous languages.