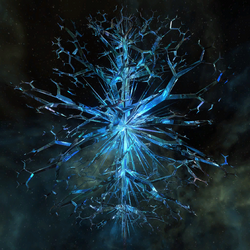 The Crystalline Entity, one of the most dangerous space-dwelling creatures in the known galaxy.

"Why does every new species we encounter try to kill us?" - Tactical bridge officer in “Frozen”

Wildlife refers to non-sentient creatures found on various planets in the Galaxy but also in space. Alternative designations can be Critter, Creature, Beast or Fauna. Most of them react aggressively to incursion into their territory.

Several basic types of creatures can be differentiated by their body structure.

Spider-like creatures dwell in a wide variety of environments, including deserts, ice caves and remote areas of space stations. They appear in packs and can move very fast. Their bite is poisonous. Spiders are smaller than quadrupeds.

Cosmozoans are creatures spending most of their life in space. Some of them can be extremely dangerous, while others adhere to a more peaceful lifestyle. Many species plant their eggs on planets and move into space after hatching. Most cosmozoans are as large as starships, while some are considerably bigger.

Four-legged mammals and reptiles appear on many planets. They usually live in packs and attack by biting their prey. Over time, sentient species have domesticated many of these. They're approximately half as tall as humanoids.

Tribbles are small, round, furry creatures. They are renown for their extremely fast reproductive system. Being born pregnant, those animals reproduce within a very short amount of time, given that enough food can be consumed. They have beneficial effects on most humanoid species, except for Klingons.

Worms are non-arthropod invertebrates. One species of worm is encountered on Nopada Prime. These live underground and prey with their mouths and acid venom they eject. These creatures vary in size, from being about twice as large as humanoids to giant Elder worms who reach the height of a multi-storied building.