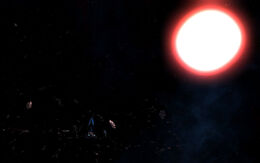 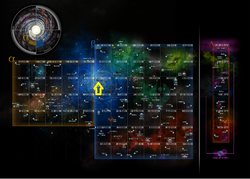 The Wolf 359 System is a system located in the Vulcan Sector of the Beta Quadrant.

While there are no story missions that require the player to enter this system, it is home to a Starfleet memorial dedicated to those who lost their lives during the Battle of Wolf 359 with the Borg in 2367. The dozens of starships that were destroyed in the battle can be seen floating in the area surrounding the memorial.

A red dwarf star, Wolf 359 was the site of the first large-scale engagement between Starfleet and the Borg in 2367. Of the 40 vessels that engaged one Borg cube, 39 were destroyed. There is now a memorial for the approximately 11,000 people who died in the conflict.