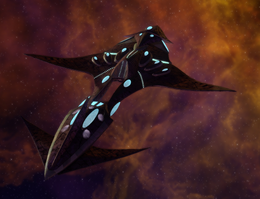 The Xindi-Aquatic Briostrys-class Dreadnought Carrier is a Tier 6 Dreadnought Carrier which may be flown by characters of any faction. This starship can be used from any level upon completion of the tutorial experience. As you level up, this ship gains additional hull, weapon slots, and console slots.

Players can obtain this starship as a very rare drop from the [Infinity Lock Box]; it comes in an [Infinity Prize Pack - T6 Ship] choice package, which is bound to you until a ship is chosen. The boxed ship is not bound and so may be traded to other players or bought and sold on the Exchange for energy credits under the name [Special Requisition Pack - Xindi-Aquatic Briostrys Dreadnought Carrier [T6]].

The Xindi-Aquatic Narcine-class Dreadnought Carrier reflects the elegant beauty of Xindi-Aquatic engineering. The ship's exterior design has remained almost completely unchanged for hundreds of years, but has undergone extensive internal refits on a regular basis in order to maintain its reputation as a high-firepower threat deterrent. It combines strong offensive capabilities with enough versatility to support both itself and its hangar craft in any confrontation.

These agile light craft are equipped with multiple Phase Biomatter beams, Quantum Torpedoes and a Quantum Mine Launcher. They are capable of using Dispersal Pattern Alpha I with their Quantum Mines, and will do so with some regularity.

The Advanced variant of the Mobulai Frigates can be obtained from the Dilithium Store, while the Elite variant is obtainable from the Fleet Starbase with unlocked Tier V Communications Array.

By using an [Experimental Ship Upgrade Token], the Xindi-Aquatic Briostrys-class Dreadnought Carrier may be upgraded to T6-X, unlocking an extra ship device slot, universal console slot, and the ability to slot an extra starship trait.